skip to main | skip to sidebar

Meta-Horde- free for a limited time.

My collab novel with Sean Page, Meta-Horde, is free for a few days thanks to the wonderful folks over at Severed Press. Pop over to Amazon Uk or US and grab yourself a copy. 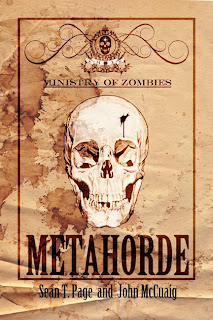 Posted by john mccuaig at 08:42 No comments:

Win a copy of Fallen Angel

I've got two copies of my latest novel available for free on Goodreads. Just pop over for a chance to win, it only takes a second.

See the giveaway details
at Goodreads.

Enter to win
Posted by john mccuaig at 15:20 No comments:

Fallen Angel- now available for the Kindle and Nook 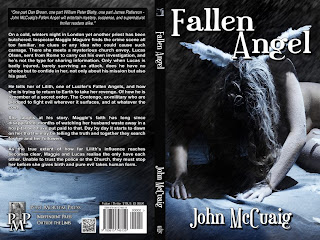 “One part Dan Brown, one part William Peter Blatty, one part James Patterson - John McCuaig's Fallen Angel will entertain mystery, suspense, and supernatural thriller readers alike."
On a cold, winters night in London yet another priest has been butchered. Inspector Maggie Maguire finds the crime scene all too familiar, no clues or any idea who could cause such carnage. There she meets a mysterious church envoy, Lucas Olsen, sent from Rome to carry out his own investigation, and he’s not the type for sharing information. Only when Lucas is badly injured, barely surviving an attack, does he have no choice but to confide in her, not only about his mission but also his past.
He tells her of Lilith, one of Lucifer’s Fallen Angels, and how she is trying to return to Earth to take her revenge. Of how he is a member of a secret order, The Contengo, ex-military who are pledged to fight evil wherever it surfaces, and at whatever the cost.
She laughs at his story. Maggie’s faith has long since disappeared, months of watching her husband waste away in a hospital bed have put paid to that. Day by day it starts to dawn on her that he may be telling the truth and together they search for her and her followers.
As the true extent of how far Lilith’s influence reaches becomes clear, Maggie and Lucas realize the only have each other. Unable to trust the police or the Church, they must stop her before she gives birth and pure evil takes human form.

Posted by john mccuaig at 20:47 No comments:

Just thought I'd post a little run down of my work over the past year.

I've pushed on with my novels this year and to my delight I've managed to get three published. I've not done many short stories although I did publish a collection that I had ready to go in various anthologies for the Library of the Living Dead Press until they hit the rocks. So, I'll give a little run down of each and a summary of how they are doing.

Meta-Horde, a collaboration with the great Sean Page, published by Severed Press. I'm really proud of this book, its an old fashioned "ripping yarn" set a few years after the zombie uprising. When just as they started to believe things couldn't get any worse they make a shocking discovery. It has been very well received by the critics although I'm slightly disappointed by the sales, not being big headed but I thought this would be a huge seller. Even so its ticking along and hopefully it will really kick off soon as word gets around.

Escape from Dead City, published by Severed Press. Set in the first 24 hours we follow two sisters, in real time, as they try to escape London and the ever growing hordes. This has been by far my best seller but strangely hasn't received many reviews.It's been in the top 100 for Horror/Occult on Amazon.uk for most of the past month.

Pyramid of the Dead, again published by Severed Press, this is I hope a very different take on the zombie genre. Set in the 16th century its another take on the historical mystery of how a few hundred Spanish Conquistadors defeated the mighty Incan Empire. Sales have been pretty grim, maybe its just a little too different? Not sure but I'll be giving it a big push next year.

Children of the Plague, a short story collection, self published on Amazon. I released this as part of an experiment as I'd never done self-pub before and I'm fairly happy how it turned out. Most of the stories revolve our younger people and are over a few genres, zombie, vampire, werewolf and sci-fi.


Next year, looking like January 15th, Post Mortem Press will publish my supernatural thriller Fallen Angel. This a long way away from my usual work and I'm really looking forward to how its received,  Currently I am working on the follow up to Escape from Dead City which is called The Last Hope, this is about half done. And the follow up to Fallen Angel called Rise of the Valkyrie, this has been a challenge, I was over half done then chucked most of it away- it was pretty rough to be honest- I've changed the whole story line and unfortunately this has put it back to only about 25% done.

I also want to get back to some short stories- I think another collection.

Most importantly next year Pam and I are eventually getting married. Now that IS something to look forward to :-) I've got lots of family coming down from Scotland for the big day so there should be plenty of fun!

Posted by john mccuaig at 09:48 No comments:

Edits all done and dusted for my latest book- Fallen Angel- being published by the wonderful folks over at Post Mortem Press. This one is quite a bit different from my usual work, really looking forward to seeing what people think. Due for release January 15th.
More details to come... 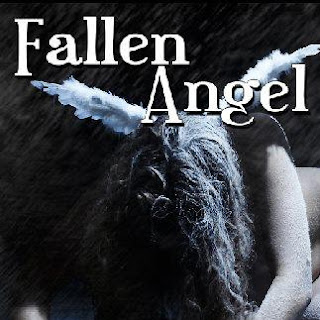 Posted by john mccuaig at 06:23 No comments:

Win a copy of Escape from Dead City on Goodreads

Here's the chance to win a copy of my novel, Escape from Dead City. London is falling. An unknown virus races through the city, killing its victims and reanimating them into mindless beasts with an insatiable hunger for human flesh. As the army fights, and fails, to control order, two sisters and their partners realise that their only hope for survival lies in leaving the city. They learn of one last train heading for the coast, one last chance to escape before the city is consumed. No matter the dangers out on the streets they need to get aboard. But this is no ordinary train, the army will protect it and its mysterious passengers at all costs. Set in real time, Escape from Dead City follows the first 24 hours of the outbreak, the secrets and lies, loyalty, trust and sacrifice.

See the giveaway details
at Goodreads.


Enter to win
Posted by john mccuaig at 15:44 No comments:

The Next Big Thing

"The Next Big Thing, authors tagged, questions answered..."
My lovely twin sister Margot McCuaig tagged me for The Next Big Thing so it's my turn to have a go at answering some questions and tag some of my favourite authors.
And of course my sister might have been a bit biased but if family can't sing your praises then who can.

What is the working title of your next book?
I'm working on a couple at the moment but I'll say Rise of the Valkyrie

Where did the idea come from for the book?
This is actually a follow up to Fallen Angel which will be released by Post Mortem Press in January. Although I usually write post apocalyptic horror I've always wanted to do a supernatural thriller.
I've often wondered if evil could somehow travel through time and take advantage during times of war and conflict, hopefully this book will show that and the reasons how and why.

What genre does your book fall under?
Supernatural Thriller

What actors would you choose to play the part of your characters in a movie rendition?
For the hero Maggie Maguire then that would have to be Helen Mirren, you wouldn't want to mess with her. For Lucas, her partner, then I'd go for Viggo Mortensen, he always looks like he's got a hidden past that he wants to keep secret.

What is the one sentence synopsis of your book?
Throughout history tales have been told of mysterious warriors coming to collect the dead. Now that history is here, and it's not just the dead they seek this time.


Will your book be self-published or represented by an agency?
It will be published by the fantastic folks over at Post Mortem Press

How long did it take you to write the first draft of the manuscript?
The first draft is not quite finished and I've been a bit delayed with the planning of my wedding but my novels seem to take anywhere between 6 and 12 months.

What other books would you compare this story to within your genre?
Nothing springs to mind but the first book has been described by my publisher as a mix of The Da Vinci Code, The Exorcist and Law & Order. No pressure then!

Who or what inspired you to write this book?
It was not only my pretty long term desire to write this type of book I also think I needed a wee break from horror. I love horror, and will always go back to it, but I needed something fresh to get my teeth into.

What else about your book might pique the reader’s interest?
I like strong female characters, far too many are there just as victims or for a touch of romance, Maggie is not a Hollywood style, ass-kicking kung-fu expert but deep down she shows real steel. I have lots of strong willed women in my life, my mother, sisters, partner and step-daughter and to be honest, I nick a bit from all of them for some of my characters.


Here are some writers that are dedicated to their craft and embrace the joy of storytelling.
I was a big fan of Sean Page even before we got together to co-write a novel and now I hope I can also call him a friend. His zombie books are the best you can get from the British market. Please have a look at his mad-cap site- Ministry of Zombies

Emma Ennis is a prolific writer of short stories who runs a great little blog. Originally from Ireland she now lives in Norway. Samples of her work are available here- Emma Ennis Blog

Rebecca Besser writes about my favourite beasties- Zombies. Her novella Undead Drive-Thru is one of the best stories of it's kind. I'm sure she has a big future- Rebecca Besser
Another great zombie writer is Vincenzo Bilof- His novel Nightmare of the Dead is without doubt one of the best novels from the other side of the pond and he has also got over twenty short stories published. Catch up on his work here- Vincenzo Bilof

And last but definitely not least is Rad Lewandowski, he helps run the fantastic Scares that Care site which raises fantastic money through horror related products. My hat goes off to this man. Please pop over to this site- Scares That Care

Posted by john mccuaig at 18:39 No comments:

john mccuaig
London, England, United Kingdom
I'm a huge zombie and horror fan. I have short stories published in around twenty anthologies and four novels, one a collab with Sean Page, out there at this time. I live in London with my far better half Pamela and our two very mad dalmation dogs. If you wish to contact me my e-mail is jmccuaig@googlemail.com Please also have a look at my new website- www.johnmccuaig.com